The cryptocurrency market has seen a spike in volatility over the past two weeks. At the time of writing, Bitcoin is at about $52K after falling to nearly $45K days ago. This crash has caused many to be concerned that the bull market for Bitcoin has reached its end. Indeed, given that Bitcoin has made a "double-top" pattern over the year, twice failing to break well above $60-$65K, the asset's momentum has faded. That said, Bitcoin remains up over 75% on the year, so it is not yet sure whether or not the death knell has rung. See below:

Looking at the price of Bitcoin in dollar terms, it is clear that the asset is struggling to make new highs. This pattern is even more evident when compared to the cost of gold, as the BTC/GLD ratio hit nearly the same level during the spring and fall peaks before reversing lower.

One notable change which proceeded the volatility in Bitcoin is the addition of Bitcoin-linked ETFs such as ProShares' (BITO). BITO has been traded and has garnered nearly $1B in assets under management despite poor performance. BITO and its peers are interesting in that it is highly accessible to investors who cannot directly trade cryptocurrency. However, those interested in BITO should know that the fund invests in Bitcoin futures, giving it some "contango risk." Additionally, the shifting economic sands may cause further declines in the price of Bitcoin. Let's take a closer look.

Much has changed in the Bitcoin market over the past two years. During 2020, fears of monetary devaluation, and a surge in excess cash levels (due to the govt. stimulus-fueled personal savings spike), helped fuel a massive rally in Bitcoin, which extended to this spring. Since then, its overall performance has been flat. This pattern is reflected in many other assets, including stocks as seen by the stark correlation between Bitcoin and the Russell 2000 ETF (IWM) (a small-cap fund) over the past year:

It is relatively clear that Bitcoin, the Russell 2000, and the 10-year inflation breakeven rate (inflation expectations measured by bond prices) are in a tight correlation pattern. Notably, the Russell 2000-Bitcoin relationship has been generally strong since the "COVID era" but particularly strong this year. In my view, this is a potential indication that many of the investors in the Russell 2000 may also be invested in Bitcoin. This may be because, like Bitcoin, small-cap stocks are seen as a strong inflation hedge. The recent spike and crash in the inflation outlook appear to be a significant trigger for the recent crash in Bitcoin.

Whatever the reason, it is evident that Bitcoin will need a cause for new momentum to rise higher. The next "halving" (an event that usually causes Bitcoin to rise) is still over two years away. Despite concerns, the value of the U.S. dollar to foreign currencies has increased materially over the past six months compared to most other currencies. Inflation remains a concern, but the inflation expectation rate has not budged materially since spring and could decline considerably if the economy slows, as I expect.

Of course, Bitcoin has not usually tracked the inflation-expectation rate as closely as it has lately; it can easily decouple if there is a change in sentiment surrounding Bitcoin's viability. There has been an enormous surge in Bitcoin investors, with over half of owners saying they bought the asset this year - a sign that speculative fervor may be at an extreme. There has also been a buildup of margin debt (leveraged positions) among Bitcoin traders since 2020. This can increase downside volatility during sell-offs. Indeed, it is likely the case that the weekend "flash crash" in Bitcoin was amplified a wave in margin calls forced sales.

There are also less quantifiable risks facing Bitcoin. As detailed in "Why Riot Blockchain May Never Generate Consistent Profits," a growing number of countries are banning or restricting Bitcoin mining due to immense (and growing) energy shortages. On the surface, this may be seen as bullish since it could result in a slight decline in supply. However, it could also mean a delegitimization of Bitcoin as some countries ban buying and selling Bitcoin altogether. Of course, efforts to ban the use of Bitcoin, such as in India today, may also be legitimizing in that it shows many governments are genuinely concerned over Bitcoin's potential to disrupt government-controlled monetary systems.

Overall, I see more bearish factors facing Bitcoin than bullish ones. Most notably, the overall slowdown in speculative exuberance facing cryptocurrencies and other more-speculative investments. I believe this slowdown is primarily due to the end in government fiscal stimulus and slowdown in QE, resulting in the normalization of the personal savings rate. Bitcoin thrives when people have excess cash on hand and want to put it somewhere. Ever since the individual savings rate crashed over late spring back below 10%, Bitcoin and most speculative stocks have been stuck. In my view, the fact that Bitcoin has failed to break above $60-$65K twice is a strong sign that it will soon drop back to 2020 levels.

While my short-term view on Bitcoin is generally bearish, the asset could certainly recover and make new highs in the long run. Indeed, Bitcoin may be in a similar position too late in 2017 (before its 80% decline from ~$19K to ~$3K over 2018). After prolonged speculative booms, there is almost always a period of profit-taking where short-term traders are moved out. Bitcoin has rarely remained flat for an extended period.

That said, any investor in Bitcoin futures ETFs must know about long-term risks related to "contango," which occurs in the futures market. Crucially, BITO buys front-month futures each month and then reinvests (or "rolls") the position into the following month as the month ends. Problematically, this can create a hidden cost which can cause material drag on BITO's value. With this in mind, I imagine BITO may see a surge in interest from investors looking to build a position in Bitcoin at potentially depressed prices. See the current futures curve for Bitcoin below: 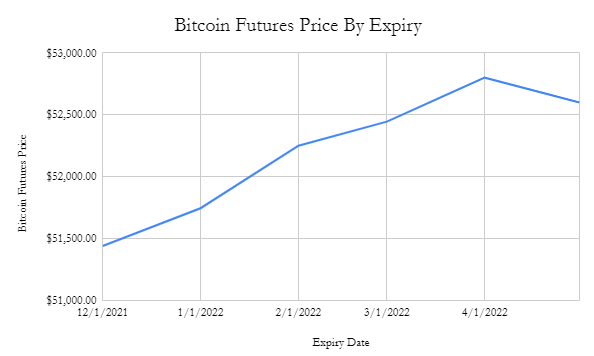 The December Bitcoin contract is currently at $51440, while the January contract is at $51745 - or roughly 60 bps higher. This means that BITO will sell its current contract at around 60 bps below the price it must pay for its next contract as it rolls the position. This will result in roughly a 7.2% annual drag on BITO's value than Bitcoin, likely closer to 8.2% after accounting for BITO's higher 95 bps expense ratio.

Of course, this problematic "contango" may not persist since an excess demand for front-month futures likely triggers is due to the creation of ETFs like BITO as well as poor liquidity in longer-dated Bitcoin futures. This creates a low-risk high-yield arbitrage opportunity for spot Bitcoin owners who sell long-dated Bitcoin futures at higher prices. Over time, this will likely cause the contango to fade as more traders pursue this. Indeed, unlike physical commodity markets with storage costs, there is essentially no reason for Bitcoin futures to have such extreme contango as they do today. Regardless, investors would be wise to avoid buying BITO until the contango factor fades.

After the front-month Bitcoin future's prices normalize, there is unlikely to be a considerable difference between BITO's performance and spot prices. Contango is a function of storage costs that are very low for non-physical assets. While BITO does have a higher expense ratio of 95 bps, BITO investors avoid some of the higher trading costs and spread associated with the Bitcoin spot market. Of course, BITO may run into difficulty during periods of high volatility. The Bitcoin futures market has a mismatch between long and short positions among asset managers - meaning liquidity may fall if Bitcoin crashes.

Personally, I would not buy BITO until Bitcoin makes a clear bottoming pattern. Bitcoin has been sliding for most of the past month and, though it is currently up from its sharp declines, "double top" patterns can often create extended losses. In my view, the recent declines in both Bitcoin and the stock market are due primarily to the beginning of Fed tapering and the recent spike in short-term borrowing rates, not "omicron." Since the newest variant is unlikely to be as severe as others, I do not believe it is a particular economic risk.

That said, I still expect the monetary impact from the end of Fed easing to have a negative effect on more speculative assets like cryptocurrencies. Inflation expectations have crashed with the hawkish change in the monetary environment. This means the "inflation hedge" factor that has benefited Bitcoin may be fading. Of course, if financial markets continue to decline and the Fed changes its tune back toward inflationary stimulus measures, Bitcoin and BITO may become bullish opportunities.