Chainalysis published a report on crypto exchanges on Nov. 11 and provided an analysis by breaking the exchanges down by their business models including DEXs, CEXs, over-the-counter (OTC) brokers, derivatives platforms and high-risk exchanges with minimal know your customer (KYC) requirements.

According to the data, the number of DEX’s between Q1 2019 and Q3 2021 increased more than 100% to sit at around 205 as of June this year. In comparison, the number of CEX’s temporarily increased from around 100 to 120, before dipping back to the 100 region within that time frame.

The amount of OTC brokers also increased significantly, gaining around 50% to sit at the 150 mark in Q3 2021. The number of derivatives exchanges got a slight bump to around 125 in 2019, and has essentially held at the region since, while high-risk exchanges broke out during the middle of 2020 to around the 150 mark, before sharply dropping below 100 in Q3 2021. 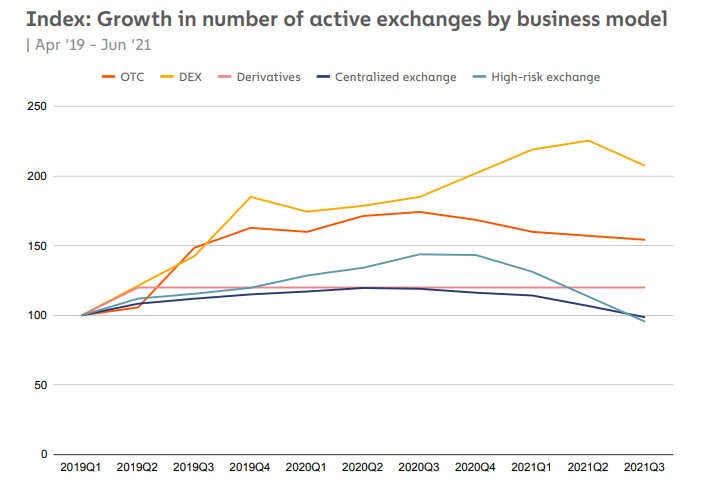 “Of course, the number of active exchanges in each category isn’t the only way to judge the health of those categories. After all, cryptocurrency businesses aren’t simply trying to survive — they need to grow their userbases and transaction volumes in order to thrive,” the report said.

Chainalysis emphasized that the growing popularity of DEXs over the past two years has coincided with the “explosive growth of the DeFi category in general.” The firm highlighted that the total value received by DEX’s grew from around $10 billion in July 2020 to a peak of $368 million in May 2021, marking an increase of roughly 3579%.

Binance is still the top dog

Despite facing intense scrutiny and pushback from regulators across the globe in recent months, data shows that the centralized exchange Binance still towers over its competitors.

According to data from Similar Web compiled by Finbold, Binance had the most web traffic out of all crypto exchanges in October with a total of 171 million visitors. The figure represents a 12% increase compared to the month before. Coinbase ranks second with 91 million visitors last month, and had a 31% surge in traffic compared to the month before.

Notably the third most popular exchange is PancakeSwap, a DEX that operates on the Binance Smart Chain, with 25 million visitors and a 14% month-over-month increase. While Bybit sits at fourth with 24 million (down 8% from September).

Coingecko data shows that Binance is well ahead of its competitors in terms of volume, with the platform seeing more than $33.3 billion over the past 24 hours. That figure is more than five times larger than the total of second-ranked Coinbase, which generated $6.6 billion worth of 24-volume.

On Thursday the Wall Street Journal reported that former Binance executives estimated that the firm could be worth up to $300 billion as a publicly-traded company. It is unclear when or how Binance will go public, considering its lack of a formal headquarters. However, CEO Changpeng Zhao said in September the Binance’s U.S. branch was looking at an initial public offering (IPO) in 2024.